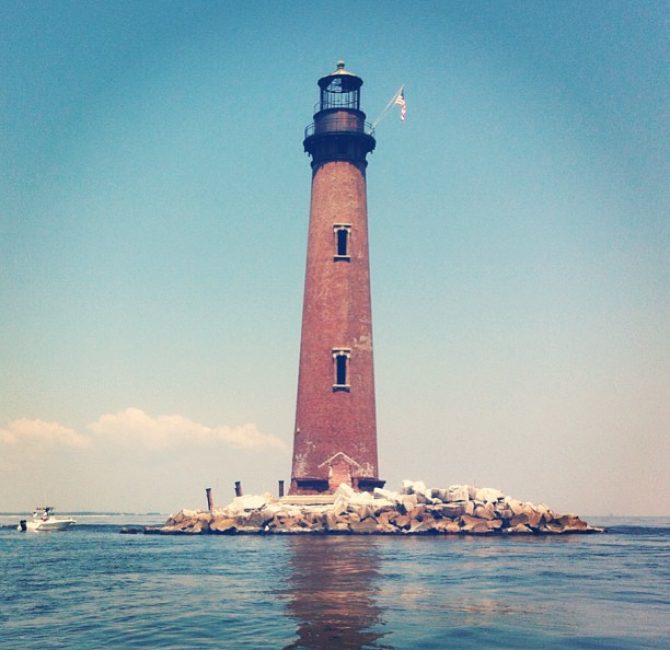 Today, we took a charter boat to Sand Island Light. If you look closely from Fort Morgan beach, you can see the lighthouse amid all the gas rigs out in the Gulf of Mexico. The lighthouse is three miles off Mobile Point where Fort Morgan is located, at the entrance to Mobile Bay. What an interesting history this lighthouse has and probably most surprising to me was at one point, you could walk from Dauphin Island out to the lighthouse, as it was connected by sand. Originally standing on a 400 acre piece of land with a keeper’s house, today the lighthouse is regarded as the last great masonry lighthouse still standing on the Gulf Coast. When it was originally constructed in 1838,  Sand Island Light was the tallest lighthouse ever to be built. 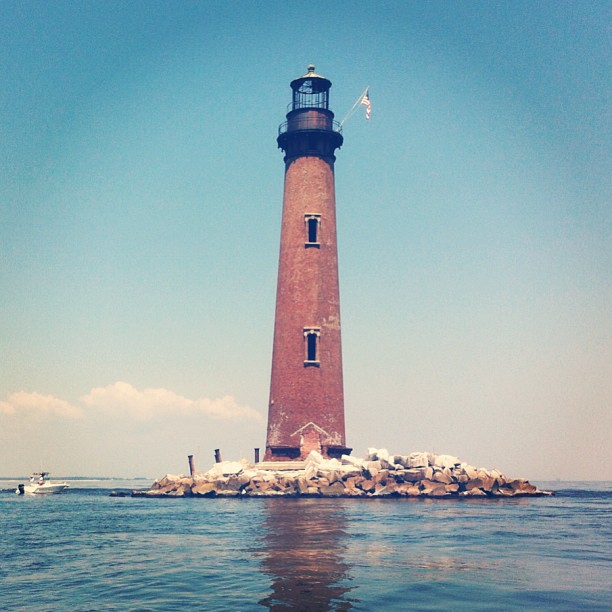 Due to the current, the water flow is interrupted by the structure, creating an eddy on one side of the lighthouse. This strong current is also the reason the sand is eroding away, and several tons of granite rocks were added to the base. The lighthouse has had several keepers and was even blow up when Confederate soldiers found Union soldiers in the lighthouse spying on Fort Morgan in 1863. In 1906 Sand Island Light was hit by a hurricane, which claimed the lives of of the the two keepers and both keepers wives, and most recently it was hit by Hurricane Ivan and Hurricane Katrina. The tower currently standing was built in 1873, is 125ft tall, and is listed on the Lighthouse Digest Magazine Doomsday List, which lists the  most endangered lighthouses in the country.
Today, the lighthouse is owned by the residents of Dauphin Island. To read more about Sand Island Light, or any of Alabama’s lighthouses, check out Alabama’s Lighthouses. One day I look forward to taking a boat ride, 15 miles to the center of Mobile Bay, to see Middle Bay Lighthouse. Unfortunately, it is also on the the endangered list. You can donate to the ongoing restoration efforts for any of Alabama’s Lighthouses here at Alabama Lighthouse Association.